The Cleveland Browns and the Pittsburgh Steelers are beginning their playoff run in the exact spot that each ended their regular season- in an entanglement with one another.  Exact is a bit of a misnomer, as both teams rested starters for a great portion of the regular season finish; a game that ended as a 10-7 snorefest in favor of the Browns.  Pittsburgh coach Deadfaulkner offered a confusing mix of stances toward the game.  Prior to the contest, Deadfaulkner proclaimed he cared not a bit about the game; his only goal being to enter the playoffs with a healthy squad.  However, down 10-0 late Deadfaulkner brought in his offensive starters, easily marching down the field in what would be Pittsburgh’s lone offensive bright spot on the day.  One would think that such dominance by his one-squad would bolster his confidence heading into the playoffs, offering satisfaction that with his regular starters, the Steelers are a much more formidable team (to say the least) that would have provided the Browns with a hefty challenge.  This is mentioned because that was unlike anything that transpired following the game.  Instead, coach Deadfaulker was dead set upon training his thoughts on a second quarter missed field goal.  Wait, didn’t the coach, prior to the game, mention that he did not care one iota if his team won or lost?  Suddenly, the coach was in an uproarious frenzy over losing.  That is where the regular season rivalry concluded:  a game each team rendered a meaningless ‘walk though’, if you will, that culminated in a Deadfaulkner rant.

The third installment of Cleveland-Pittsburgh has the Browns traveling to Steel-town, as they did in Week 8.  The playoff game should resemble Week 8 more so than Week 16, and one can strongly assume that even the hotheaded Deadfaulkner knows it.  In Week 8 Pittsburgh handled the Browns 26-7, with Pittsburgh sticking mainly to a ground assault, rushing the Tecmo Legacy League’s eventual rushing champion, Franco Harris, 11 times for 123 yards.  Harris also scored twice.  On the other side of the ball, Cleveland, as they sometimes do, employed a two-headed QB attack, however; neither Brian Sipe, nor Dave Mays were able to offer up anything special in the game.  The Browns did get a solid effort out of stud halfback Greg Pruitt, who rushed for over 100 yards on just 10 carries, but the Pittsburgh defense will tell you first hand:  over half of those yards came on one rush.

On the season the Steelers were second in the league in total offensive yardage output, including finishing second in rushing.  Cleveland also features a potent rushing attack behind the aforementioned Greg Pruitt, who finished the season with 1,192 yards (6th overall).  As a team, Cleveland finished right behind the Steelers in terms of rushing.

It has been pointed out many times before that total yards, either offensively or defensively, often fails to prove a sound measuring stick for assessing teams.  What matters most is the scoreboard.  If one attempts to evaluate teams strictly from a yardage standpoint what tends to get overlooked in the statistics are meaningless yards that come after the game is out of reach, or cases where a few big plays are interspersed with a ton of ineffective plays.  For the latter, an example would be a few big cheap catches scattered throughout the game, but in between mediocre to poor offensive production.  It happens quite a bit, and so here we will move onto how the Steelers and Browns fared in terms of points scored and points allowed.  Pittsburgh scored the 6th most points per game in the league (22.3), while surrendering the 7th least (15).  Cleveland produced the 15th highest scoring team (20.3), and ranked 13th in points given up (19).  In terms of points then Pittsburgh’s advantage is about a touchdown a game, while Cleveland tended to be caught up in more closely decided contests.  More forcefully stated: on the season, in terms of total point differential, the Steelers outscored their opponents by 117 points while Cleveland only outscored opponents by 20 in total.

What does this all mean for the next installment of the Pittsburgh-Cleveland divisional rivalry?  Pittsburgh is clearly the better overall team.  This is not to simply disparage the Browns.  It is merely a fact.  On paper, the Steelers are a top 2 or 3 team.  The same cannot be said of the Browns.  However, records are not won by preseason statistical rankings.  The Browns have at the helm, coach Chaos, who is currently, on the season, the top coach win percentage wise.  The fact that the Browns reached a mark of (10-6) amidst a division full of stubborn foes speaks volumes.  The Browns were (4-2) in the division, knocking off both the Steelers and Bengals, while sweeping Houston.  Outside the division, Cleveland also managed to knock off defending Super Bowl champion Washington (a team that finished this season 11-4-1).

In order for Cleveland to win Greg Pruitt must be effective running the ball- that is where the Browns are able to do the most damage.  When Pruitt becomes his unstoppable self, it importantly opens up the passing game for Sipe and Mays, two QBs finishing near the bottom of the league.  The Browns need this balance to keep the Steeler defense off guard.  Cleveland will have to play creatively on defense, often gambling, as well as getting lucky with picked plays, if they are to consistently stop the Steelers.  Truth be told, all of Pittsburgh’s opponents have had a tough time attempting to slow down, let alone stop, the Steeler running game, so this is a lofty task for a Cleveland defense that does not feature any dominant MAN defenders.  Passing wise  Terry Bradshaw has been used minimally, but efficiently, throughout the season, as he has only thrown 16 TD passes (to only 4 INTs), but ended up throwing the 21st least number of attempts among the 28 regular starting QBs.  In addition, Pittsburgh features two speedy and sticky-fingered wide receivers in John Stallworth and Lynn Swann.  Meanwhile, the Browns have the steady Reggie Rucker at WR, but crucially lost their second WR, Paul Warfield, for the entirety of the playoffs.  Cleveland is also without Cleo Miller, a hybrid running back with a valuable combination of above average HP (56) and decent speed (44).  Miller often played second fiddle to the dynamic Greg Pruitt, but still gained over 500 yards rushing, despite also missing five games after injuring his ankle in Week 11.  The Steelers are completely healthy on offense, but are notably without the league’s best defensive lineman, Joe Greene, who leads the league in sacks with 18.  Greene also has 57 tackles, which is a ridiculous number for a defensive lineman.

In all, the Pittsburgh-Cleveland wildcard game will be a game chock full of intensity, as two divisional rivals slug it out.  The game offers intrigue and excitement, as it features two of the Tecmo Legacy League’s most productive running backs, in Franco Harris and Greg Pruitt.  The difference in the game may well come down to defense, and in that regard, Pittsburgh holds the trump card. 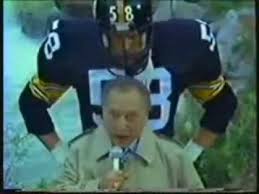 Pittsburgh linebacker Jack Lambert took the ‘Lambo’ leap right over Tom Pridemore’s 12 tackle, 2 interception performance, landing as the Week 2 Defensive Player of the Week. In doing so, Lambert took the ‘pride’ out of Pridemore, and took the ‘more’, as in adding one more article about himself to the 1981 collection. 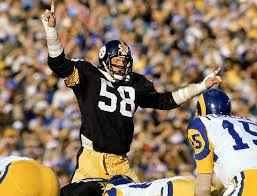 I already recounted Lambert’s efforts in an article last week, so what else is there to say about Lambert? The aging, yet sprite linebacker, has had three consecutive eye opening performances, stemming back to last season’s AFC Championship game where he recorded 10 tackles and sacked Craig Morton 3 times. Attached is a video recounting the dedication and intensity of THE #58.

Wk11 A Chief Concern: Pittsburgh-Kansas City Slug It Out At Arrowhead 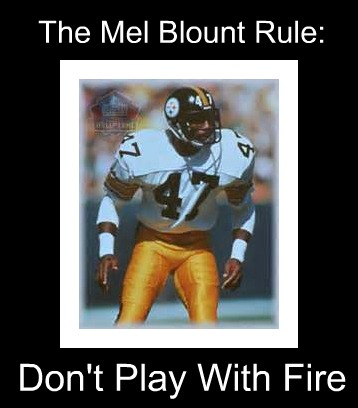 The Pittsburgh Steelers and Kansas City Chiefs grinded out a game that wasnâ€™t complete until one minute remained in ooooverrrrrrrrtiiiiiiiime! The Chiefs primarily used a strategic ball control offense that proved effective, especially in the first half, where the Steelers managed only six total plays and one real drive. Although Kansas City ate up the clock they remained scoreboard starved as the Chiefs lost the ball on downs their first possession, while their second possession ended in a missed 60 yard field goal by Nick Lowery.

In the third quarter the Steelers finally put together a semblance of a drive, but it stalled at the Chief 35 yard line. From there, Matt Bahr knocked home the first of two field goals. The third quarter also saw Art Still dominate the interior of the Steeler line, as he crashed through on almost every play run or pass. His charge up the middle helped funnel Steeler running backs into the waiting arms of the â€˜Taxmanâ€™ Gary Barbaro, who was magnificent in the game. Barbaro made just about every play that came his way, and twice made a shoe string, pin-point dive, to prevent long runs. As it stood, neither team found much success running the ball- both teams averaged under 3 yards per attempt.

Midway through the fourth quarter the Steelers clung to a 3-0 lead. Facing a 3rd and 5 from near midfield, Terry Bradshaw dropped back to pass. Bradshaw located a wide open Randy Grossman in the middle of the field, but when it came time to throw the antsy Bradshaw sent the arrow to the running back who was double covered and far short of the first down. Luckily the pass was not intercepted, but the Steelers would have to give up possession. Disaster struck twice as the ensuing punt was blocked. Craig Colquitt, Pittsburghâ€™s punter, despite circling the ball several times refused to pick up the ball to minimize the damage. Instead, after about five seconds of circling, the Chiefs scooped up the loose ball, returning it to the Steeler 29-yard line.

With the clock winding down in the game, the Chiefs trudged their way to the Steeler 12-yard line. Finally the bruising James Hadnot plodded his way to the end zone, knocking away several Steelers in the process. The Chiefs now lead for the first time all game, with only just about a minute remaining in the game. Adding to the high Tecmo drama, Lowery had his XPT block, so Kansas City only lead 6-3.

In desperation mode, Bradshaw chucked a pass to Lynn Swann, a 45 yarder, which was Swannâ€™s only target of the day. Pittsburgh ran one more run play to try and make the field goal attempt more manageable for Bahr. True as his previous attempt, Bahr knocked it home, sending the game into overtime.

The Kansas City Chief quarterbacks played with fire all game, but the Steelers were unable to collect an interception. But in the extra period Bill Kenney gambled for the last time, as an errant pass found its way into triple coverage. Mel Blount picked off the pass, broke a tackle, and dashed down the field 60 yards before being caught at the 5 yard line. Two plays later veteran tight end Randy Grossman found the end zone for a 12-6 Pittsburgh victory.