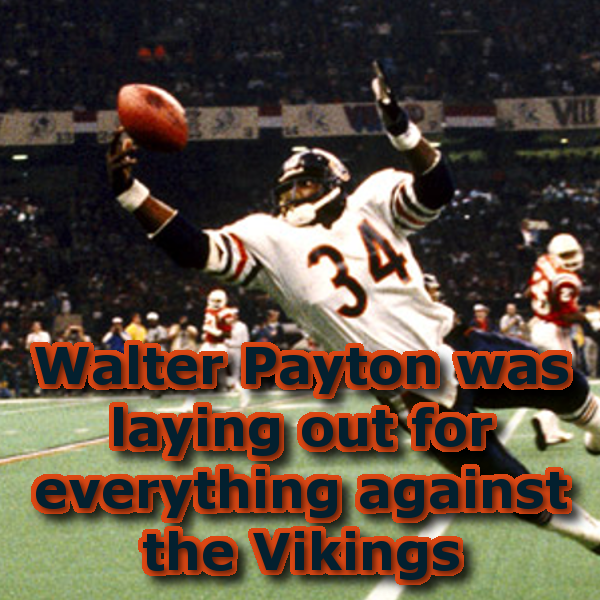 It's 1982 already, and this is the first time I've had the chance to write one of these Player of the Week articles about Walter Payton. Despite his being the TLL's leading all-time rusher, it's just his second time winning the award, with his first coming in Week 11 of 1980. And this time, thanks to his 56 RECEPTIONS attribute, he's won the Offensive Player of the Week award for his pass catching rather than his rushing. Against the division-rival Vikings, he gathered in all 245 of the Bears' aerial yards on five catches, four of them for touchdowns, and he carried the ball twice for 34 yards and another touchdown. Chicago won the important division clash in a shootout, 45-35. Payton set the league record for receiving yards by a running back in a single game, and was the 10th-highest for any player not named Largent.

There aren't too many stories I could write about Payton that haven't already been well-documented elsewhere. But one of the most impressive stories is told simply by looking at his page on pro-football-reference.com. It's what I've always thought to be a remarkable career:

During the eleven seasons from 1976 through 1986, Payton rushed for over 1,000 yards ten times (with a minimum of 1,222), missing the mark only in the strike-shortened 1982 season. Even during that year, Payton was on pace to go over 1,000, so we can give it to him. That's more than a decade of dominance, putting him in an extremely elite class of running backs. It makes me wonder: what claim does Walter Payton have to being the greatest of all NFL rushers?

So here we go. Matt's about to go all stats-crazy once again. But before I do, let me start with a couple of notes. First, a caveat: if we had some of the newer stats-keeping available across all or most of NFL history, it might be close to possible to answer this question . But although rushing yardage has been recorded since 1932, it only records carries, yards, and touchdowns. There is no record of the game situations in which those yards happened. So, in the absence of situational stats, we'll have to deal only with the compilation of rushing yards.

Second, to be considered the best of all-time, you have to have been the best of your time. And by that, I don't mean for just a year or two; "greatness" in the definition I'm using here, requires both productivity and longevity. So, sorry Terrell Davis and Priest Holmes: you're not in this conversation. So, somewhat arbitrarily, let's look at 10-year periods. To qualify, you had to have led the league in rushing over a 10-year period. I compiled a list of those players for every 10-year period since rushing records have been kept. I also translated those yards to a 16-game season to account for differing season lengths and injury, so that rushing statistics look more like those that we see in today's NFL. I kept a running career 16-game average of the period that the player led the league to create a smoother trajectory of the player's career productivity.

This list by itself doesn't tell us a whole lot, other than telling us whose careers deserve further investigation. For example, it's clear that both Joe Perry and Eric Dickerson were each premier backs of their day, since Perry was the league's leading rusher over eight consecutive 10-year spans and Dickerson for six. But, over his career, Perry's average yards per season (adjusted to a 16-game average) hovered between 1,007 and 1,040 yards, while Dickerson started out at 1,710 and, although his average decreased over time, it never dipped below 1,522. Does that mean that Eric Dickerson was a lot better than Joe Perry?

I don't think it does. The real question of greatness is how a player performed against his peers, how dominant he was in his time.

Let's look at the players whose periods of ascendency were significantly long to be considered dominant: say, four or more consecutive decade-long stretches of leading the league in rushing. That gives us Steve Van Buren (7), Joe Perry (8), Jim Brown (9), Leroy Kelly (4), O.J. Simpson (6), Payton (7), Eric Dickerson (6), Barry Sanders (4), and LaDainian Tomlinson (4). That leaves off Tuffy Leemans, about whom I know next to nothing, but it also leaves out Curtis Martin, about whom I know a lot and am very comfortable saying he has no business in the conversation of the greatest running back of all time. I'll assume that Leemans and others whose period of leadership was three seasons or fewer are in the same boat as Martin. Four seasons also gets Barry Sanders into the comparison, which I think is pretty important.

To compare those guys across eras, I looked at their career rushing totals in comparision to their contemporaries. Specifically, I compared the rushing totals for each season of their careers to the league leader in rushing for that season and the 2nd-place rusher. I then expressed that number as a percentage of each. For example, Leroy Kelly was the leading rusher for 1967, so he gets 100% of the leading rusher total for that season. His 1205 yards were 123.97% of the 2nd-highest total that year (Dave Osborn, 972 yards). In 1969, Kelly finished 5th in rushing (817 yards); he gets 86.73% of 2nd place (Calvin Hill, 942) and 79.17% of the lead (Gayle Sayers, 1,032).

That gives a good year-by-year number that allows us to compare players of different generations with different rushing practices. I then added the % of 2nd place and % of lead and calculated a running career average from year to year. On a graph, that line should give us a good visualization of each back's career trajectory.

One thing that I think is crystal clear from this: Jim Brown was a badass. You look at his rushing totals, and they look pretty good in comparison to today's numbers. In 2015, Adrian Peterson led the NFL in rushing with 1,485 yards, which Brown surpassed three times in a nine-year career. That's especially impressive when you consider that two of those seasons were during the shorter 14-game NFL season that began in 1961 (1,863 yards in 1963 and 1,544 in his final season of 1965), and even more so when you see that the first time he did it was in the 12-game NFL season of 1958. In a 16-game season, his 1,527 yards that year would translate to 2,036. Pretty impressive.

But you've seen 2,000-yard rushers in your lifetime. Nobody had seen anything close to what Brown was doing during those years. There had only been seven 1,000-yard rushing seasons in NFL history when Brown first did it in 1958, and he would go on to equal that number himself. And he would do it in a big way - Steve Van Buren's 1,146 yards in 1949 was the single-season rushing record when Brown entered the league, and Brown would top that number seven times. By the time he retired, Brown possessed the top three and seven of the top nine rushing seasons of all time.

I knew that Brown won the rushing title in eight of his nine seasons before doing this study, but what I did not know, and what these charts reveal is by just how much he was blowing his competitors away. Brown's career median of 228.28 means that on average he was winning the rushing title by 28%. That's an average. By comparison, the next-highest median on the list was Barry Sanders, whose career median of 199.18 meant that in an average season, he was losing the rushing title by .82%. In his 1,527-yard 1958 season I mentioned above, second place went to Alan Ameche, who rushed for 791 yards. In other words, Brown ran for 93.05% more yards than his nearest competitor. Three of his rushing titles were by 78% or more, and two more were by 25% or more. Of those charted, only one captured a rushing title with more than 75% more yards than his nearest competitor: O.J. Simpson, in his 14-game, 2,003-yard 1973 season, ran for 75.09% more yards than runner-up John Brockington (1,144 yards). Brown's dominance was unflagging and it is unquestionable:

Jim Brown is the greatest rusher in the history of pro football.

If we're looking to quantify greatest rushers, I think the career medians are a pretty good way to do it. So here are those, in order, along with the %s from each player's most dominant season:

So, sorry Walter - you don't have a claim to the greatest rusher of all time. Jim Brown's got everyone beat by a mile, and Barry Sanders, Steve Van Buren, and Eric Dickerson have got you beat.

However, no one has ever been more consistently productive over a long time than Payton. Excluding his rookie and retirement seasons, he was within 75% of a rushing title in nine out of 10 seasons, and nobody on this list produced that level of consistency.

Just for giggles, here's Adrian Peterson's career so far on the same scale as the other backs:

Peterson's 2012 season, when he ran for 2,097, was the most dominant we've seen on this list since Payton's 1977, and his career median 2nd-place-plus-lead-% puts him just behind Payton in 6th on the all-time list.